Man I hate(d) Time Trials, I’d do anything at all to get out of doing them.  It was a little confusing because I can TT up a hill pretty well and I’m kind of fast at riding a pursuit bike around a track for 5 minutes so the overlap should be somewhere in the realm of a road time trial.  Because going to London for the Paralympic Games now requires me to beat a lot of people in a Time Trial in June at Road Nats I figured I’d quit hating the discipline and figure out how to go fast.  I also have a high placing at the Tour of the Gila GC as a goal so limiting my losses in the TT will be a big deal.  One of my big issues was discomfort, my bike never felt right on my naughty bits or on my upper body.  I finally caved and got one of those ridiculous split-nose saddles.

I know, it looks silly.

But it works!  It feels very natural in the aerobars, it also feels powerful by letting me get rotated forward enough to drive through the pedal stroke.  The down-side is that I can’t ride the thing for longer than 10 minutes on the bullhorns because of the width of the nose but that’s not much of a concern to me.

The next change was the aerobars, I had tried to force myself into some very agressive and sometimes narrow positions.  It looked good to the eyeball wind tunnel but I ended up in positions I couldn’t ride in or produce power in.  I thought about my go-to road bike TT  position which is the hands-over-hoods/sphinx position. 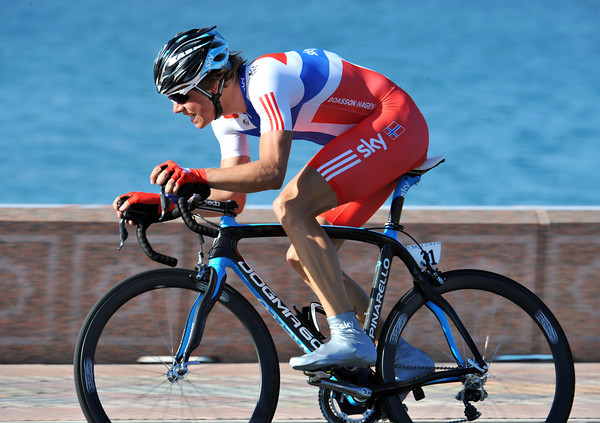 Instead of trying to get my hands really narrow I rotated the extensions so my hands are more in line with my elbows.  This feels a lot better and gives me more stability in the bars which means I can spend more time in them being more aero.  The current position looks like this, I’d say it’s 90% at this point with some contact point adjustment and attention to aero details needed.

I drove up to Denver yesterday with Jon for some crit racin’.  He raced the 4/5, took 4th, and had some insight on the course.  The course used 3 roundabouts as turns, the first was an easy dog-leg but the 2 others were 150 degree turns using most of the roundabout to complete the turn.  It was also windy, 15-20mph with gusts well over.  I waffled on wheels but decided to go with the 50mm race wheels which turned out to be the right decision.  I won the race to the race again (second race in a row where I started on the front row exactly where I wanted to, I’m getting good!) and was planning to patrol the front for the break I expected, but everything went sideways.  I could not get around the roundabouts fast enough and soon found myself dangling at the back, getting gapped, and sprinting out of the turns to regain contact.  I was working on my line and increasing entry speed but I lacked the confidence to hit the turns fast enough, I realized after about 5 laps that I was not racing and was in it for the workout.

Crash!  About half-way through some guy 3 bike lengths ahead of me went down in a turn.  He slide straight and his bike went wide.  I instinctively went to the outside like I would on the track but that was the wrong way on the road.  His bike was sliding into my path and the curb was coming up quickly so I got on the front brake hard enough to lift the rear wheel.  I kind of bumped into his bike right as I was coming to a stop, put a foot down, and kept it up!  I was granted a lap and jumped back in, I thought the rest would do me good but the official held me until half the pack had gone by so I was doing a full-on Kilo start to get back in.

I finished out the race at the back of the main field, 22nd/34 starters with 10 DNFs.  I had great legs to be able to sprint and recover 40-something times but it didn’t mean much during the race, other than keeping me from going off the back.  I know where I went wrong, I need more confidence in those abnormal corners.  The funny thing is that I am 100 times better than I was last year, some day, I tell you, some day.

It was not a loss from a workout standpoint, I’m pretty sure I haven’t ridden that hard since I raced my first 1/2/3 Points race back in Aug, ’10.  Gila is 6 weeks away so some hard racing is good for me.

After Worlds I took a few weeks off to put Worlds behind me, do some soul searching, and plan for the year.  I eased back into riding and was particularly pleased with the base I still had.  I hadn’t lost much fitness at all but I kept the first week pretty mellow and began a sensible ramp in week 2.

With 2 weeks in the legs I headed to  Boulder for a little crit action.  The Cat 3/4 field was huge, 124 on the start line!  Excluding the Scratch Race at Worlds it had been 6 months since my last mass start race, longer since my last crit and I had some self-doubts about my pack skills.  After 3 laps I realized I could move in and around the pack at will so I drifted back for some shelter from the wind (it was pretty windy with mostly cross-wind).  I tried to draw out a break with 4 laps to go, but when I attacked on the hill I got 50 meters of separation instantly.  .  I knew I couldn’t hold off the group in the wind solo so i sat up to wait for the sprint.  I ended up 19th.  I was too far back coming into the final turn and ran out of time to hunt people down.  It was a solid start to the season.  I’ve seen huge improvements in my ability to ride in a pack, descend, and ride in the wind recently, I’m not sure why, maybe time on the bike, maybe I’m better at killing my cautious streak.  I also learned that I don’t have to be a good sprinter, I can do well in races with a good final corner position and my 1 minute power.  A couple months of FTP work might negate that need while I’m still a Cat3 but I have a lot of racing between now and then.

Today’s training ride deserves honorable mention as it is in my top-5 favorite rides of all time.  I rode with fellow Paracyclist and new OTC resident Jon C.  We spent the winter in Chula Vista together and have a really great training chemistry.  We gained +6000 feet of elevation and went pretty deep into mountains before finding a side road that snaked it’s way towards a valley with 5 different sections where the posted speed limit was 25mph due to the turns.  Thanks to pristine pavement and perfect banking we ripped through most of the turns over 40mph, at 9,000 feet it was breathtaking,

Having bid a  farewell to Track Worlds I still have to qualify for the Paralympic Games, the goal was to wrap that up at Worlds but the goal was not achieved.  So now I get to go race a Time Trial to fight for my spot on the London team.

The plan for the season is to train for the TT and to race my bike.  I am racing a full schedule for the first time since I moved to CO and I love racing my bike!  The biggest able-body goal for the first half of the season is Tour of the Gila, the biggest, meanest amateur stage race in the US!  Paralympic Trials will be in June, those are kind of a big deal.  The Paralympic Games will be in September provided trials go well.  Most people will kick back after the games and take time off but I will continue training with the objective being the Elite Track Nats Points and Scratch races.  I’m also hoping to wiggle into the Beer City Invitational at the Asheville Mellowdrome in October if that race pans out.

All of that has to wait because I will kick off my 2012 season at the CU Boulder crit on Sunday.  First race as a Cat 3!

Track Worlds more or less saw me stagnate in relation to Track Nats which means I don’t want to talk about it, but I suppose you learn more missing the mark.  This is my bread-and-butter event, or it should have been.  In particular, I bombed out of the Individual Pursuit, my race.  8th: I never found my rythme, something I have done in numerous training session.  My teammates say I’m like a metronome and you could set your watch to my lap splits, not on race day.  I’m fast when I ride consistent and I was not.  The Kilo saw me in 6th with a rather average ride.

The only bright spot was the Scratch race in which I finished 7th.  The placing itself wasn’t that impressive but I am pleased with how I rode (the second portion of the race).  Mass start track racing is new Paracycling with this edition being an exhibition, medals were awarded but no titles or jerseys were.  The UCI combined the C5 (arm amputees and arm impairment) and C4 (below-knee amps and hemispheric Cerebral Palsy) categories and threw 22 (24 is the max number allowed) of us on the track together.  After 4 or 5 “neutral laps” the race was finally underway.  2 groups of 3 took a lap and the first group went again.  I saw the move go and joined, it was a good move to be in as we stayed away and I rolled in 7th, first rider 1 lap down.  We put on a good show, no one died, we averaged almost 31mph so I’d say we earned more mass-start paracycling track races.

I am disappointed with the level saddle rule.  If you look at almost any rider in a time trial position they are perched on the nose of the saddle due to the saddle setback rule and cannot push back on their saddle for leverage.  The rule makes many saddles in common usage unrideable or causes the riders to ride in uncomfortable and even unhealthy positions.  It’s madness.